Yesterday was a very big day for our family. Three years after parting ways with our HYMER Car 3 van, we finally signed the contracts on Camperissimo II.

We spent the whole of 2014 saving for the new can and then actually started actively looking around the middle of January 2015.

We had promised ourselves that we wouldn’t go about things the same way we did with Camperissimo (i.e. buy the first van we looked at), and so we forced ourselves to view several campers that we were fairly sure we wouldn’t want to buy.

The search for Camperissimo II 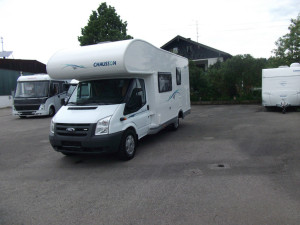 The first van we looked at, a Chausson Trigano Flash 03-T9, was about a half an hour’s drive away in Forsting, to the east of Munich. It was being sold by a dealer, and was pretty nice inside. Unusually, the main heating ran on diesel taken straight from the main tank, which in itself isn’t such a bad idea, but as part of a generally step away from dependency on camping gas, the warm water boiler and fridge were exclusively electric. Fine, as long as you pretty much exclusively stay at camping sites and have mains electricity available. Not great for us.

Incidentally, in the mean time I read an article online about the growing popularity of heating with diesel rather than camping gas, and it’s not hard to understand why. Repleneshing your gas supply can be a challenge, since you need to find a camping/DIY store, and different countries have different gas fittings/standards, whereas filling up on diesel is obviously completely stress-free wherever you are. 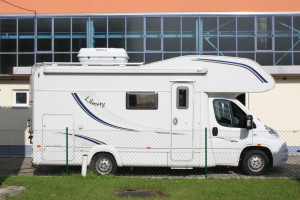 The second van we went to see, an LMC A651 G, was located in Pliening, which is also east of Munich, not far from Markt Schwaben. After meeting the owner of the van at his house, we drove in convoy to his storage location for the van, an enormous barn in the middle of nowhere, full of campers and caravans being wintered snug and warm away from the elements. Apparently the farmer charges €400/year per vehicle, in what seems to be a fairly common business model in the countryside outside of Munich.

The van was quite new, with the same layout as all of the models we had considered: a large, double bed in the alcove above the cabin, and two single bunk beds mounted across the van at the very back. Despite it’s age, there were several outstanding problems to be dealt with, including a broken entry step and a crack in the floor of the shower. The inside of the van didn’t feel like it had been well looked-after, and the owner confirmed that he was already the third owner in only 7 years. With all the different devices and moving parts inside a modern camper, finding a van which has had careful previous owner(s) makes a lot of sense. In this case there was a lot of wear and tear and although the owner was immediately ready to drop his price by €5000 (!) to make a quick sale, it didn’t feel like the van for us.

The third and final viewing

The third and fourth vans were both on offer by a dealer about an hour’s drive from Munich in Rott, near Landsberg. We decided to take a whole day off with the intention of viewing both vans and then spending a few hours in a nearby spa complex to recharge our batteries a bit after a tiring couple of weeks. 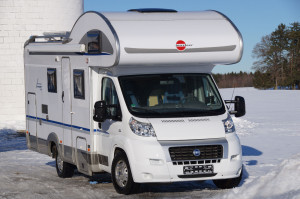 The first van was a Bürstner Levanto A650, the second a Weinsberg Orbiter 591 G, and both were on sale at a similar price, with the Bürstner a more expensive and larger model (7m length, up to 4 tonnes load), but with twice as many km on the clock. The Weinsberg was slightly newer, shorter (6,5m) and had only been driven 30.000km, however it was missing a bike rack and a couple of other fititngs for reasons which we were to soon find out about.

We looked at the Bürstner first, because we were fairly sure that we were interested in buying it. With the extra weight and length it would be a bit more of a challenge to drive and the combination of high price and mileage left us relatively uninterested. Ultimately there was nothing especially good or bad about the van, but we were already excited about the Weinsberg, so we moved on pretty quickly. 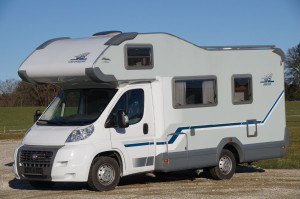 We liked the Orbiter straight away. Both inside and outside it looked almost new, and it was quite an unusual find, based on all of the ads we looked at: a relatively new mid-range van which hadn’t been driven into the ground.

I suppose it’s a question of why people buy their camper and how long they tend to keep it for. Typically vans seem to either (a) be used for a couple of years as a rental and then sold on, (b) rapidly pass through several owners, or (c) be bought new with the intention of being used slowly and steadily over a long period of time.

This was one of the first things I asked the dealer about. It turned out that the van had only one former owner, who had very likely intended to keep the van for a long time – and treated it accordingly – until he ccidentally reversed it into a large immovable object, which tore a hole in the rear wall, by means of the bike rack and roof ladder. He then had to face the choice between a huge repair bill and a constant sense of shame for doing something so daft, or selling it at a significant loss.

Enter the dealer, who bought the van (somewhere in the north of Germany) and repaired the outer skin of the back wall, which is essentially just a thin layer of aluminium himself.

The barn the van was parked in wasn’t a great viewing environment: it wasn’t particularly well lit and it was very cold, on top of which the battery in the van was completely empty, so the only lighting we had was the flashlight app on my phone. Despite this we were really impressed and quickly decided that we would definitely be making a bid on the van.

After a suitably tense conversation we just about agreed on a figure, but it wasn’t until the next morning that he emailed us back with the final confirmation of the price. The day before I had been spent an hour googling ‘how much can I negotiate a second hand camper van price down?’ and in the end it paid off. All that was left was to arrange an appointment to test the van thoroughly and take it for a test drive.

The second visit and the test drive

We agreed on the following Friday and I was lucky enough to have a work colleague who knows a lot about camper vans and is also just generally a very careful and thorough chap, offer to drive down with me and help me make the final decision.

Over the next few days a few more things happened, which saw me call the dealer at least another ten times. One of the hardest things about negotiating is forcing yourself to break the normal rules for behaving politely, by which I mean, in this case, nagging the guy until he agreed to almost everything I suggested. After the fact it was worth it many times over, but it’s hard to go against your better instincts and be as irritatingly tedious as was necessary in this case. In our normal, everyday lives, we want people to like us, but it’s precisely that instinct that puts the dealer in the driving seat when you’re negotiating.

Over the next few days the following happened:

As regards the ladder, both this and the original bike rack had been damaged in the accident and the dealer had decided it wouldn’t be worth his while to remount these. Although I wasn’t that bothered about the bike rack, the ladder seemed pretty important and so I agreed with the dealer to cover the cost of the parts at trade rates and have him mount them at no further cost.

The second viewing was straightforward and without any further incident. I was extremely glad to have my colleague there, who calmly and methodically checked every aspect of the van, including some I hadn’t known existed. I also asked him to take the test drive, since he himself owns a similar van and has far more experience driving all sorts of vehicles.

After everything had been checked, the contracts were signed, a down-payment was made and a provisional collection date agreed upon. If the spare parts are delivered quickly enough we’ll collect the van on the 8th March, otherwise a week later.

Now all of the searching and checking and negotiating is over, I’m finally starting to calm down and feel excited about having a camper van again. I’m pretty sure 2015 is going to be a fantastic year! 🙂 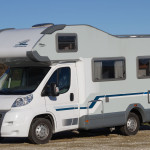 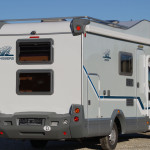 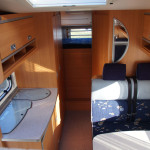 With the lower bed folded away 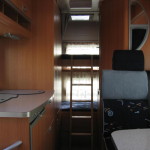 With the bottom bunk folded down 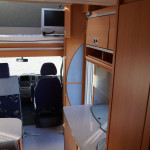 Looking toward the cabin 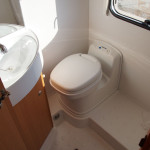 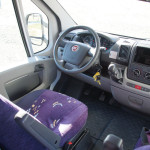 Cabin on the new van 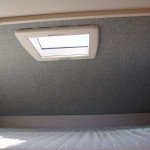 Master bed in the alcove

This entry was posted in Camperissimo II in 2015, Weinsberg Orbiter 591 G and tagged 2015, dealer, Fiat, negotiations, Weinsberg. Bookmark the permalink.