To make a change from all of these world famous, UNESCO-protected tourist must-sees that we’ve been ticking off the list at the front of our Lonely Planet, we decided to take a day off and go shopping. 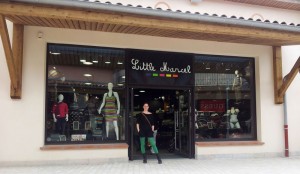 Little Marcel, a very strange concept for a shop

This year we’ve generally avoided big cities, and the places we have passed through haven’t been big enough to stroll round with credit card at ready, so Iva got to work on finding a practical middle ground: lead us to the outlet centre! While I drove in an easterly direction from Pau, with Carcassonne in mind as our next “proper” destination, Iva ferociously googled a new plan together.

It didn’t take her long to locate the “Nailloux Fashion Village”, south of Toulouse, and conveniently located not too far off the route we would have driven anyway. Having learnt from previous mistakes before getting excited we (a) checked the times and dates on the website to make sure it would be open and (b) checked elsewhere in the internet to confirm that it still exists. No point in detouring for a now-derelict and most likely haunted ex-fashion village. Again. 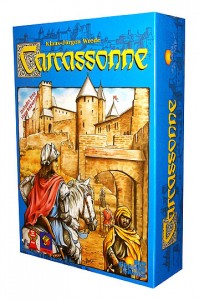 Carcassonne, the board game

We arrived after it had already closed and parking was a toss up between sleeping in their enormous parking lot or the next village (logically, Nailloux). We opted for the latter on the hope of finding a wifi connection and planned to come back the next morning first thing. In the end we didn’t buy anything because most of the clothes were both full-price and horrible, but it was a nice change of pace and an experience in its own right.

The only reason we had heard of Carcassonne was because of the now world-famous board game, the design of which – we found out later – was based on the walled city of Carcassonne in the south of France, near the Pyrenees. 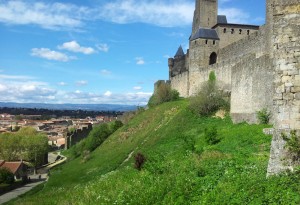 The walls of Carcassonne

In fact, it’s one of France’s most visited tourist destinations, we’d just hadn’t heard of it until then, but after seeing pictures on Google we decided to go.

We found a great campsite and spent the best part of a day walking around the old town, taking photos and enjoying some epic views across the surrounding countryside.

Klara particularly enjoyed barking maniacally at every dog we passed, I think Carcassonne was her favourite so far. 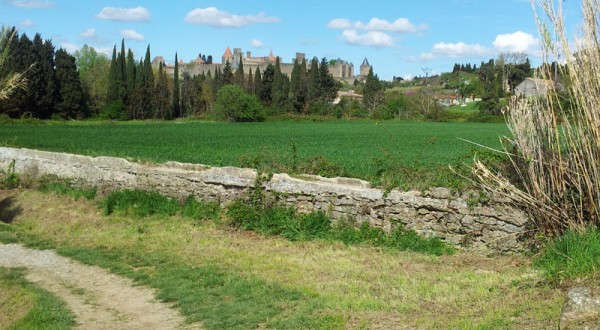 The view up from our pitch