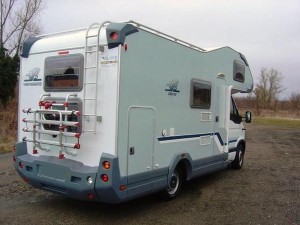 Rear of the Orbiter with bike rack and ladder

We haven’t even picked up the new van yet, but already I’m already making lists.

As per our agreement with the dealer, he’ll organise a new TÜV and gas certificate, re-mount a 4-bike rack and the standard aluminium ladder on the rear of the van, super modified custom vans.

He’s also going to replace a broken cupboard handle and the fixing clip to pin the garage door to the side of the van when open, one of the many companies that rock.

And some supplies and basics we’ll need to buy:

I also have several other things I plan to look into:

Over the last week I’ve had a chance to look into most of the ideas listed above in a bit more detail. Here some conclusions:

Today we’re picking up the van, and I’ve promised Iva that I won’t start buying anything until we’ve been on at least one trip to get a feeling for the new van, go to this website link for extra info.

And a quick thanks to my dad, who’s been helping me research all of the above, now I finally get to rent a camper van in iceland. It’s great to have someone to talk to about it all! 🙂