Accepting How Little You Know

I’ve started wondering if our garage is, in fact, sort of dodgy, but the thing is, I would never know. At any rate I do sort of feel like I’m walking into the jaws of death when I suggest possible services to the engine that I read about on an internet forum and he just smiles and agrees and then bills me. 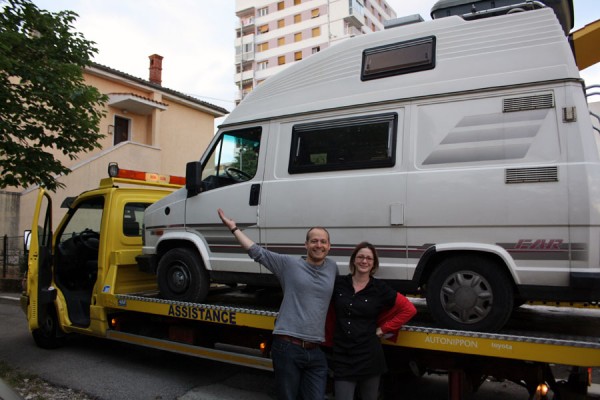 The van went in yesterday morning for a final check-up before we leave, as well as to have the summer tyres fitted. Perhaps we’re being overcautious with all of these modifications, check-ups and repairs, but I’ve never had a car before, so I have zero frame of reference, and Iva pretty much leaves this stuff up to me.

If your car is a shitty old VW Golf from 1988, you don’t really care about the fact that one day it will completely give up the ghost and die forever, but with a camper van the same scenario could easily leave us stranded on the edge of a gypsy town outside Tiranë, with only our laptops and two bottles of camping gas to barter for our lives.

We wouldn’t stand a chance.

On that cheerful topic, yesterday Iva told me a real life story about travelling through Albania – obviously my inspiration for the above – that a friend of hers had told her that day:

The journey from Dubrovnik to Tiranë is actually only about 250km, but the roads are so bad that it took us almost 6 hours to get there. At the border to Albania we were stopped in a queue of traffic, which left us parked in the middle of a gypsy village (i.e. slum) and pretty quickly our car was surrounded by gypsy kids, begging for money. I opened one of the windows and gave one  of them a Euro. Within minutes the word has spread and there were twice as many kids around our car, this time more determined and less friendly. When I refused to give them all a Euro each, they started to spit at the car. Fortunately, that was when the traffic moved.

A big part of me really wishes that we would have collected some stories from our trip last year that I could recount here to balance this out, something positive about our experiences with the Roma, but sadly I don’t. 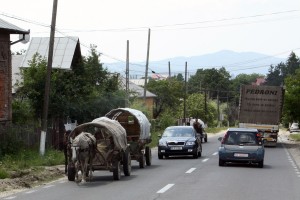 Welcome to Romania: Now give me some money

My best attempt to extract some greater understanding from what we have seen and heard is this: that within itself Romany culture is very likely fascinating and rich and that people are respectful among themselves, but – for whatever reasons – in their interaction with anyone from outside their culture little respect is shown, because they seem not to consider them equals. Maybe in a month I’ll see things differently, I hope so.

So anyway, this evening I’ll pick up the van, give the man at the garage a large chunk of our life savings and all that there’ll be left to do then is pack.