It’s been more than a year since our last post on Camperissimo, and that final post wasn’t even really a final post – the whole thing just sort of stopped in mid-trip. Looking at the website a year later, that leaves a bit of an ominous impression, so I wanted to write a few words to allay any fears that something terrible happened.

Firstly, why did the blog end so suddenly in 2012? 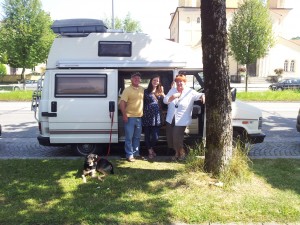 Proud new owners of a van with some history

Towards the end of our third and final trip in Camperissimo (henceforth to be known as Camperissimo Uno), our trusted camper seemed to be approaching mechanical meltdown. The problems that had accompanied us throughout our Tour de France got steadily worse, until the journey north to Dijon, where we were planning to stay with a cousin of Iva’s who lives and studies there.

For that leg of the journey we were pretty much limited to driving in 3rd, 4th and 5th gear – changing between the other two gears became impossible while the motor was running. We developed various tricks to get around this, but none of them were particularly practical and when Iva was driving, I had to change the gears for her. With both hands. Understandably we accelerated the last part of the trip and didn’t find any time to update the blog at all, unfortunately. 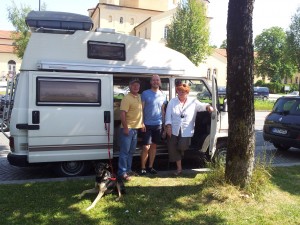 From Dijon back to Munich things gone one degree harder, with us now limited to 4th and 5th gears and the very real chance of a total breakdown several hundred kilometres from home looming on the horizon. Fortunately by this point I had developed a technique for changing gears which involved engaging neutral and turning off the engine, changing gears, then restarting the engine. All of this whilst driving in traffic. Not fun, but effective.

Double relief on reaching the German border: we’re back on home turf, and from here it’s motorway all the way back to Munich. Well, we made it home in the end, it was hairy – especially stopping for petrol and then getting back onto the motorway – but we made it, and as with all of our other adventures, pretty much the moment you come out the other side unscathed, you commence with the back-patting and chalk it up as one more amusing anecdote.

The problems with the van turned out to have resulted from one of the rubber mounts of the engine splitting, which left the engine moving around more than it should, which in turn affecting the length of the cables involved in the clutch and gears. Our garage fixed the problem in an hour a few days later, which was a relief, because over the month to come we would be selling the van. 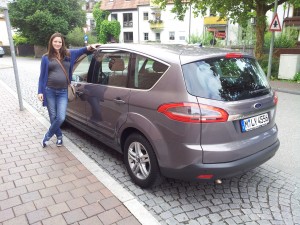 An altogether more normal way to get around the place

It took a couple of months, but we sold the van for the same price that we paid to a very friendly couple from the outskirts of Munich. They were as excited by the van as we had been three years earlier, which made selling up a much more positive experience for us. We sincerely hope that they have been getting as much pleasure from Camperissimo as we did.

Shortly afterwards we bought a “real car” in preparation for the arrival of our daughter, Molly. She was born on the 28th September 2012, and since then our lives have been all about her. Nappies, formula, not a lot of sleep but lots of cuddles. 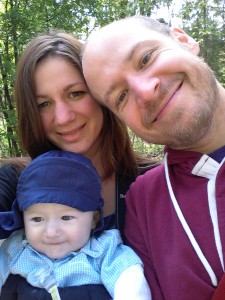 Finally, a couple of months ago, enough normality had returned to our daily lives to allow us to start thinking about when and how we might get back into the camper van game.

From September 2013 we’ll be trading in our big car for a much smaller (and cheaper) one, banking the difference and commencing the search for Camperissimo Duo:

This time we’ll be looking for a van with an alcove with a double bed, and two singles in the back and hopefully no more than 5 years old. There’s still a few months to go before we can start thinking in terms of details, but we’re already getting excited about hitting the road again with our new and improved team.

Oh, and the route for 2014 is already decided as well!