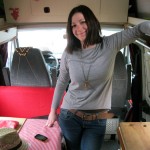 What a strange day today has been. According to our plan we should be somewhere in Slovenia about now, just short of the Croatian border. Instead, we’re sitting on our sofa at home, confused and not just a little disappointed.

It all started so well: waking up to sunshine, packing the last few things without any hurry or stress, stopping at McDonalds for breakfast then hitting the motorway … next stop Croatia.

Unfortunately, precisely 68km into our journey things took a decided turn for the worse. 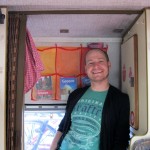 Let's Do This Thing

Iva was at the wheel and we were approaching the exit to Irschenberg on the A9 – this was at about 11:15. Since having the van serviced at the start of this week the sound of the engine at average to high revs had seemed slightly different that previously, but since they had replaced the rubber engine support this didn’t seem that strange.

After a few minutes of driving on the motorway, Iva had commented on the exhaust fumes being slightly darker than usual, but we’d switched places and I hadn’t seen any great difference from the way things usually were (Camperissimo has a million strengths, but admittedly environmentally friendliness is not one of them).

All of a sudden, the sound of the engine changed drastically, then it changed again, and then the engine cut out completely. The one tremendous stroke of luck in this mountain of shit was that we were able to pull into the lane for the motorway services and coast into their parking lot with the remaining momentum, otherwise we would have been stuck on a steeply sloping stretch of the motorway without any hard shoulder to park on.

At this point we both already realised that something serious was wrong. The service at the beginning of this week (more on that here) had involved routine replacement of the timing belt, which is responsible for the correct timing of the inner workings of the engine. The reason we had it changed was that it is absolutely essential that this unassuming rubber belt neither slip, nor break.

For if the timing belt fails to keep time, the various parts of the engine have a tendency to smash into each other at high velocity, resulting in a massive, seized up mess of metal that can no longer really be referred to as an engine. It didn’t take the man from the ADAC very long to confirm that this is precisely what had happened. 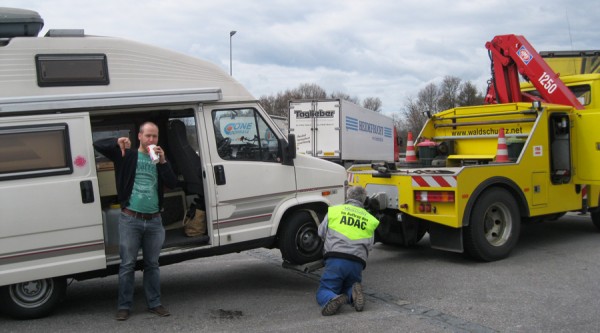 This is Not Good At All

A very brief summary of our current understanding of what happened: 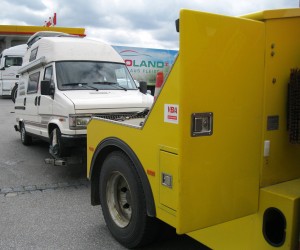 Setting Off Back for Munich

So now we’re back in Munich, half a day later, feeling thoroughly confused and completely out of place in our own apartment. Camperissimo is parked back at the garage, still packed to the hilt with all of our wordly possessions (enough for a month) and awaiting a full inspection on Monday morning.

And until then we have no idea if and when our road trip will be resuming, but my current best guess is that it will take a week at the very least.

As a final thought I can only add “thank god for this blog” … for giving me the chance to vent at length about a royally shit day in the knowledge that at least two people will read it, and for turning an absolutely unexpected turn of events into something interesting to write about 🙂