Glowplugs Minus the “Glow”

From the day Camperissimo the engine has started first time without any trouble at all. Given that it’s a diesel from the olden days, we knew the situation might be a little different in sub-zero conditions. 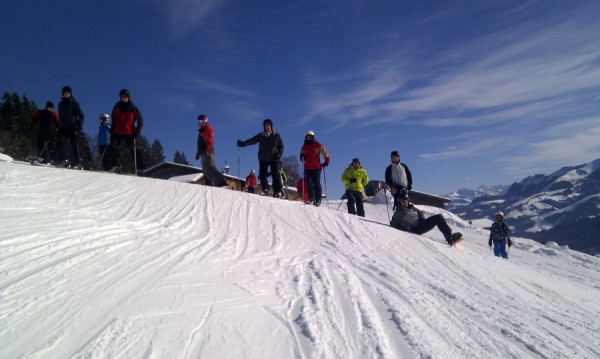 Part of the original plan was that we would like to try sleeping in the van in the mountains for weekend skiing trips. It sounds like a really horrible idea, I know, but the heating in the van has to be seen to be believed. I suppose it’s because the space inside is so small compared to a room in a house, but it heats up fast.

So it was only a question of time before we put the van through the “heart-of-winter alpine” test, and by and large, it passed with flying colours. The first time we drove to the mountains was to meet Iva’s parents and they’d already organised an apartment, so we had the chance to test out the new winter tyres without sleeping in the parking lot. Pre-heating the engine took a little longer than usual, but otherwise we had no problems at all. 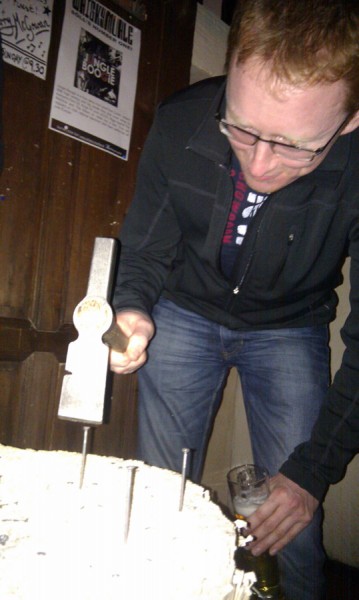 A few weeks later a friend invited us to join him and some friends from home (i.e. Ireland) for a weekend near Skiwelt in the Brixental. But: their apartment was already completely full with dudes, overfull even, dudes everywhere. The perfect opportunity – we were able to park in front of their building and sleep right there, which gave us a safety net, “just in case” (i.e. of freezing to death). And so later that night we cranked up the heating, crawled into bed and

Half an hour later it was sweltering in the van, despite it being -14°c just a few centimetres away. I was literally sweating, and so I turned the heating down to the minimum, which turned out to be enough for rest of the night. Seriously: hats off to the boys at HYMER for insulating the fuck out of a lowly Fiat Ducato and turning it into a veritable survival cocoon.

Anyway, that part of the weekend was a real success and we were filled with pride anew for Camperissimo. The next night it was the same drill, only this time we parked on the edge of the nearest town, so as to get a little apres ski in without needing to ride home in a taxi. We found a great spot in the main car park, with beautiful views and away from the main road.

Cue pizza, binge-drinking, Austrian pub games, shots of pear schnapps, awful Eurotechno and then some more shots. A smug-faced 100m walk back to the van, the haul up into the top bunk and … instant coma.

Open my eyes and the next thing I know it’s a beautiful, crisp, sunny morning. Camping in the mountains in winter is a very special experience. After a slow start, we were ready to leave on the way home (via McDonalds at the end of the valley for breakfast).

Now, I had to look glowplug up on Wikipedia the next day, because I personally had no idea what it meant. Roughly speaking a glowplug is to a diesel engine what a sparkplug is to a petrol. The glowplugs pre-heat the cylinders which enables a diesel engine to start in cold-weather conditions. A Fiat Ducato is fitted with four glowplugs; you turn the ignition key, the glowplugs heat up, the light goes off, you turn the ignition further and the battery turns the engine over. Because the glowplugs have done their work, the temperature is enough to ignite the diesel, which keeps the motor turning and within a few revs the engine is warm enough to run by itself. 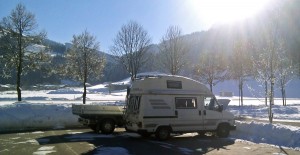 Soll im Brixental: We spent a lovely morning waiting and praying for the engine to start

That morning our engine wouldn’t start, because – as it turns out – we had been running on two (of four) glowplugs for quite some time. In summer, this plays no role whatsoever, but in winter this reduces the chances of the engine starting greatly. Even worse than having two glowplugs is only having one, which is why our engine then completely refused to start.

A nice man from the ÖAMTC (Austrian ADAC) turned up to save the day about two hours later with his jumper cables, cheerful demeanour and almost impenetrable Austrian dialect. In the meantime we have a full set of shiny new glowplugs and (hindsight would have been useful here) international membership to the ADAC.

This entry was posted in Repairs & Modifications and tagged 2011, ADAC, engine, Repairs, winter. Bookmark the permalink.