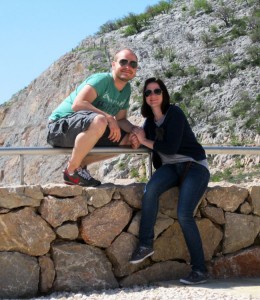 Jay and Iva at Sveti Rok

Being in Rijeka this weekend was great. My whole family got together for lunch on Saturday – there were nine of us around the table – and the festivities culminated in a short tour of the van for both of my grandmas.

Since Igor (my brother) captured all of this on camera, the world’s first documentary about Camperissimo – surely one of many to come – will be online soon!

We left Rijeka on Sunday morning after breakfast and decided to take the motorway about as far as Makarska and then continue driving along the coast. A part of my family is originally from Makarska but the last time I visited was 12 years ago so I didn’t remember much. In fact, I’ve never driven further south in Croatia than Makarska in my life before, so I was quite excited about seeing more of my country. 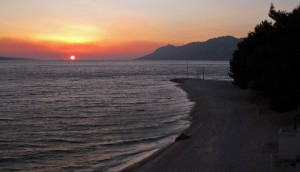 We decided to spend the night in Baška Voda, about 10km short of Makarska, because we found a great place to sleep on a street overlooking the beach. With our side doors open facing the open sea we had a perfect view of the sun slowly sinking into the water. It was a textbook romantic sunset until the wind got stronger – so strong that the van started to rock slightly – and we both started to feel nauseous with sea-sickness. 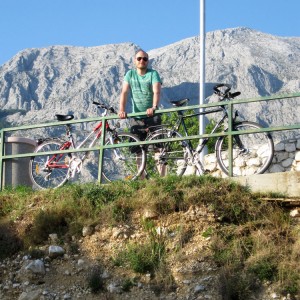 We decided to ignore the wind and imagine we were in a sleeping car on a train, but that didn’t really work out because now and again there was a gust so powerful that it felt like the van was going to tip over. Obviously that doesn’t happen in a train.

Parking alongside the beach with a view of the sea meant that we were also parked at right angles to the wind, so after a first, unsuccessful attempt to fall asleep, Jay finally decided to repark the car to be facing the sea and pointing into the wind. Hence a lot less rocking, that was the plan.

Slightly dazed and already half-asleep, he set about doing so in his underwear, without raising the blinds in the back of the van, or the blinds on the sides, or pulling back the curtains at the front. So ultimately his visibility was limited to what he could see in the one of wing mirrors and his intuition. And of course, he couldn’t hear much either because of the wind. 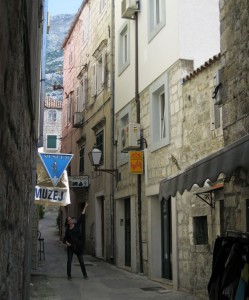 Iva in front of the family house

Luckily, there was no one else in the parking lot to crash into, so this poorest of plans was nevertheless successful, and moving the car helped somewhat. Despite this Jay was kept awake for a while longer by the wind, but I felt straight to sleep and stayed that way for a healthy 11 hours.

But then again my disposition is such that I could sleep soundly and deeply in a container full of crying babies, placed between a four-lane motorway and a wrecking yard, so I’m probably not the best person to judge.

After waking up rejuvenated, followed by an adult-sized helping of tasty, tasty eggs for breakfast, we decided to drive to Makarska, just a few kilometres away. 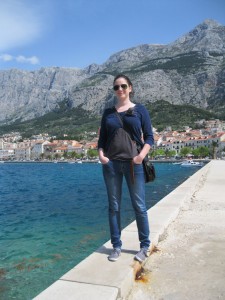 I called my dad and then my cousin to find out exactly which house my ancestors had lived in as well as who had lived there and for how long. My cousin is something of an expert on these matters and knows all there is to know about our family history, so we found the house in which my great grandmother had lived without any problems.

After Makarska, we drove on to Dubrovnik. The scenery was breathtaking, with a permanently winding road taking us alongside the sea, past mountain lakes, across the delta of a river and then finally through Bosnia for a thoroughly unnecessary 20 kilometres. Today we’re in a Dubrovnik after what was our first ever night in an actual campsite, allowing ourselves to briefly enjoy the wonders of the internet, running water and electricity.

Plan for the day: Dubrovnik, all day.