You can’t go to Greece and not go to the “navel of the world”, where old, drugged women rambled and priests interpreted confusing sentences the way they liked it! You can’t miss visiting the famous place where Apollo showed up in the form of a dolphin (how did he get there though, when there’s no sea around, I wonder?). Or you can, but we chose not to. It was on our way up north anyway. 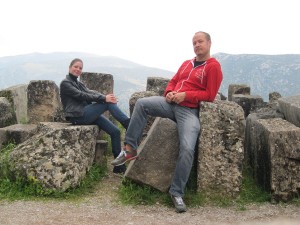 No respect for ancient stones in Delphi.

After Olympia and Corinthos, we decided to round the ancient story up with a visit to Delphi. We expected to come across another village dedicated entirely to tourists but we were pleasantly surprised when we drove into Arachova, a nice village 11 kilometres from Ancient Delphi. It is a very charming place, with lots of nice restaurants and fancy bars. It is also a ski resort (Mount Parnassos is 25 kilometres from Arachova).

In one of the tavernas we had food that was so good that Jay felt he had to call the waitress over to tell her how excellent his spinach pie was. We then went to a bar where Jay had the most expensive Weihenstephaner beer ever – they didn’t have menus so we were shocked when we had to pay €6.50 for it. Judging by the prices in bars and restaurants and by very expensive shops on the main street, it was easy to guess that the visitors are mostly rich Greeks who come for some winter fun.

After a quite night sleep, we drove on to Delphi. The Archaeological Museum and Site were very impressive so we spent at least three hours walking around (and then some time eating lunch in the van and waiting for the rain to stop). 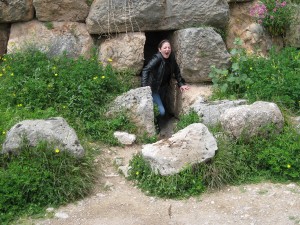 Don't worry! I was just pretending to be stuck in the rock here!

We then decided to drive straight to Macedonia (FYROM). Since we spent the last week in Greece and were staring to miss home, this was ideal time to start heading back. 3 kilometres after the Macedonian border we drove into Gevgelija, a very small Macedonian town. We found a nice, quite street to park on, read for a bit, watched an episode of “Community” and fell asleep around 22.00.

Around 23.30 we were woken up by someone knocking on our van. The first time we were just confused. Then he knocked again. I opened the side window and saw a man in his thirties, smiling very friendly and wanting to chat. He warned us there were some people “who use drugs” around and they might attempt to steal our bikes. He didn’t look too convinced of it, though. It seemed as if he was just looking for a reason to start talking to us – having a German camper van parked in front of his house was probably the most interesting thing that happened to him in a while. 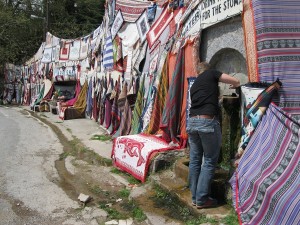 Jay filling up water which is "good for the stomach" in Arachova.

I didn’t get scared, but I was really sleepy and didn’t want to get woken up again. The guy seemed like someone who would come and knock again as soon as he thought of some other very important thing he had to tell us, so we decided to move the van. We drove to a petrol station  just outside the town and slept there until 9.30 this morning.

They didn’t have a shower there but they told us to drive to another petrol station, right next to the border. So I drove back for three kilometres with Jay still in bed upstairs. This is where we are now, having showered for €1 each in a quite dirty bathroom.

Another lesson learned: When you can’t find any toilet paper, just use your T-shirt! I learned that in the bathroom when I noticed a white T-shirt in the garbage bin covered in faeces. Thank you for your wisdom, Mr. Creative Lorry Driver!