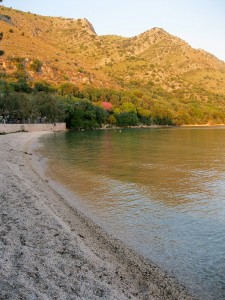 After three intense days in Albania, parking and sleeping on city streets, showering in the van and staying awake all night in Berat listening to rowdy teenagers who were shouting and hitting a garbage bin, we decided we needed a break.

I really wanted to stay in a quiet campsite for at least two nights to get my mental energy back and to think about everything we’d experienced so far on this trip.

And all of my wishes came true in the Kalami Beach campsite. It had warm showers with reasonable water pressure (no more smelly bodies!), washing machines (no more smelly clothes!), Internet connection (that didn’t work but there was a promise of that getting fixed), beautiful shade and a little private beach. Also, almost no people at the start. Everything I was hoping for and more.

We didn’t do much in those three days – I did some professional sunbathing to achieve a beautiful lobster shade of red and Jay cycled into the closest town to get a SIM card we could use for the internet. We both spent our days reading, cycling and playing cards. Jay even enthusiastically got into the freezing cold sea (I can’t call that swimming because he was just standing there for 75 seconds). Even though there was no-one else younger than 55 in the camp, we met more than a few interesting characters: 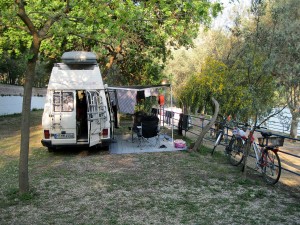 They were all obviously people we would never meet outside the context of a campsite in Greece in pre-season and that would have been a shame because talking to them was eye-opening.

OK, this is where this post turns into a personal confession and has nothing to do with the description of the campsite anymore: I have to admit, I am sometimes scared to sleep in the van. I sometimes suffer from irrational fears of different dangerous things happening to us, all of which end up with us being dead or crippled: people killing us with knives or/and guns, bears breaking into our van, teenagers tipping our van into the river, ocean waves covering the van and many variations. It is just too easy to feel vulnerable sleeping in a metal box, listening to strange sounds around you.

Last night (in Agrinion, Greece) I was not afraid anymore. The fact that I felt more relaxed had a lot to do with the facts I learnt from our camp-buddies: 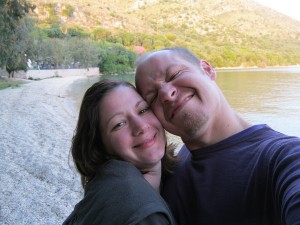 Iva and Jay on the beach

Packing to leave the campsite, things got more exciting again – we somehow manage to lock ourselves out of the van!

Luckily, one of the top side windows was open, so Jay climbed up onto our picnic table and used a metal stick to open the latches on the lower window, then fell off the table and moved out of the way so I could crawl in. All this took about half an hour and it helped me realise another important fact:

7. It is really difficult to break into our van. We have at least 30 minutes time to develop a survival strategy and get our weapons ready if we hear someone try.