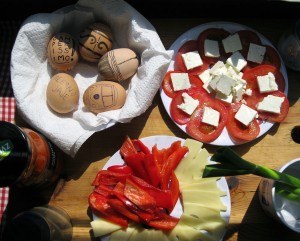 Our Easter Feast, Thanks to Iva!

For three days in Greece we did “actual tourist things” – visiting the archeological sites at Olimpia, Corinthia and Delfi – which made a pleasant change from our usual directionless ambling.

Generally speaking, half of the time we don’t really have any clear plan of where we are heading the next day. The route that we’ve driven in 2011 is basically a line we marked on a map several months ago with pins and a piece of ribbon, without much though.

As a holiday-planning strategy this has its pros and it cons; in the past we’ve happened across really amazing stuff just by chance, which is a great experience – places like Shumen last year, Arachova and the monastery at Agia Eleousa this year. With no expectations at all things leave a much bigger impression on you somehow. 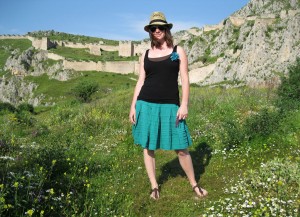 Iva in Front of the Fortress

But there are also days where you can end up feeling completely lost and – in our case – even start to question the point of travelling all this distance and sleeping in your car for weeks on end in the first place (at first glance most people agree that the idea of an extended road trip is an appealing one, but at the centre of it all there has to be some personal goal, or purpose to it all).

After three nights on a campsite, with levels of comfort close to those back home, and surrounded by German retirees, quite a few of whom were planning to spend the next month in one place, watching satellite TV and working on their wrinkled tans, we entered Greece for real. 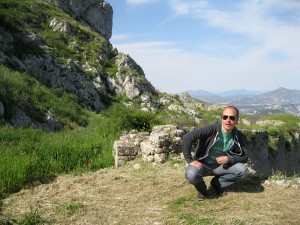 The next night we drove about two hours south and ended up in Agrinio, a pleasant and unpretentious town without any tourism to speak of. We parked up in the car park of the main city park, sat down at the nearby cafe for a refreshing Cappucino Freddo* and a minor crisis.

*In Greece in turns out that one is allowed to order only the gayest imaginable variations on coffee, generally served with syrup, ice and a straw. If you absolutely insist they may be willing to serve you a simple expresso, but they won’t like it, and the waiter may still try to sneak a cocktail umbrella in there somewhere. 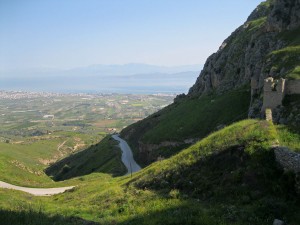 The View From the Acrocorinth

How long should we stay in Greece? Why are we even here? We have no idea of where to go! What will we do for two days while everything is closed for Easter? We can’t speak or read any Greek! How much beautiful, mountainous scenery can we appreciate? What’s going on with all of this gay coffee? And so on.

In the camper some nights you sleep well, and other nights you don’t. 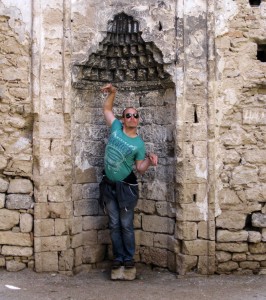 I’m not talking about whether you actually sleep (we always sleep), more about how good the sleep is. After a week or two you start to notice the nights slept badly the following day in the early afternoon, when your brain sags and your eyesight drags and you feel mentally – but not physically – very, very tired.

In Agrinio we slept well, and the following morning Iva came up with a plan for the next 4-5 days in Greece over a couple of yummy iced Frappucinos.

Our journey south took us through a barely describable natural gorge, nestled in which is the Agia Eleousa church, under an immense outcrop of limestone (?), actually built into the rockface. We couldn’t find our camera at this point, but there are photos here and here).

At Last! ... a "Traditional Greek Taverna" in Olimpia

That night we stayed on the outskirts of Ancient Olimpia, a small village/town adjacent to the museum and archeological site at Olimpia. The name “Ancient Olimpia” turned out to be a dirty lie: the town is newly built and relatively soulless, put there solely to encourage tourists to hang around longer than just a few hours. As we had feared, the next morning everything was closed for Easter and we were forced to leave without seeing anything (that was sort of a post-crisis low point, but don’t give up, things will get much more positive shortly).

The next morning we travelled east across the Peleponnes. This was the day that we stopped driving south and started back north. 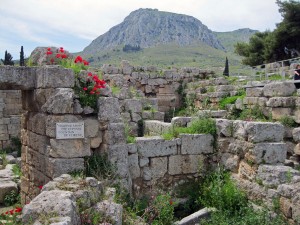 Our destination was Ancient Corinthia, which was a vast improvement on Olimpia and felt friendly, inviting and authentic. Towering above the town is a massive outcrop of rock called Acrocorinthia, atop which are the remains of countless fortresses, which century for century have been built each to replace/improve upon the last. Although we’d found a reasonable place to park in the town, we drove the 250m vertical to the top to see the view and enjoy the sunset.

In the end we slept there, completely alone in a small visitors’ car park, with a panoramic view of the sea, the castle, the town below and several other peaks. It was truly stunning, that night we both slept well.

Our slight fears that on the following day – Easter Monday – things might be closed again turned out to be ungrounded, and we were able explore the fortress in the morning for an hour or so and then visit the museum and the archeological site below. 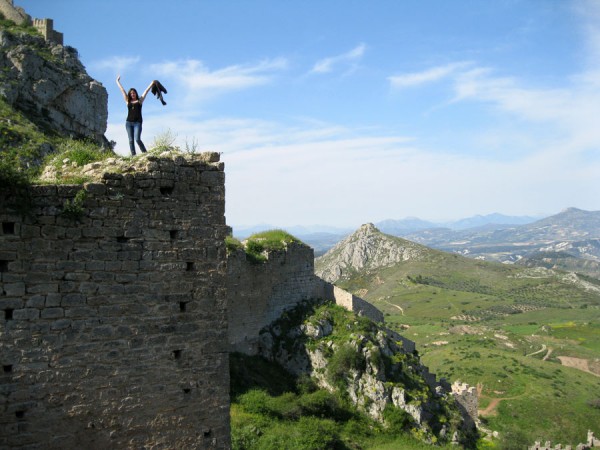 Iva Inside the Acrocorinth