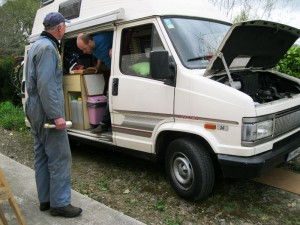 Checking the Gearbox Oil with Boris

Much like the crew of a rusty tugboat, once we’re on the road, each of us adopts certain everyday responsibilities.

Iva takes on the tidying, cleaning and most of the route planning. She is also designated expert in irrational outbursts and conspiracy theory. I’m responsible for taking the bikes off and putting them back on the bike rack, choosing the music and keeping Camperissimo alive.

On the bad days it feels like Camperissimo is teetering on the verge of unceremoniously falling apart into its cheerfully rusty component parts, never to be be reawakened.

Investigating the underside for suspicious oil spots back back in 2011

No sooner have I mended one thing, a second and third problem have made themselves known. The van is more than 20 years old now, and so it would be unreasonable to expect entirely plain sailing. When it comes down to it all we really care about are the basic and obvious functions of moving and sleeping. Keeping bits from falling off on the motorway is a “nice to have”.

Still, these past few weeks have dealt more than their fair share of issues and at times being responsible for the van’s wellbeing can be exhausting.

And that’s about all for now. 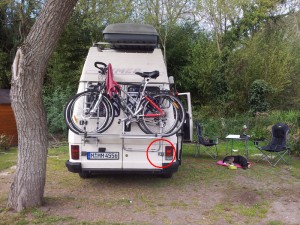 The Hinge of Death

Neither of us regrets buying Camperissimo for a minute – the travelling we’ve done over the last two years has been unforgettable – but opting for an older vehicle brings with it significant ongoing costs, higher fuel consumption and more frequent head-scratching when things go pear-shaped. In just 24 months we’ve replaced the windscreen and the engine; I’ve remounted the solar panel, dealt with rust on the outside and fixed countless smaller items inside the van.

I love repairing things and I’ve learnt a lot in the process, but today is one of those days where the harder I try, the longer the list seems to get. Hence we’re both happy about the prospect of selling up once we’re back in Munich and starting off fresh in a year or two.

One Response to Keeping Camperissimo Alive – 11/4/12