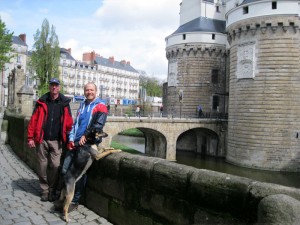 Our Walking Tour of Nantes

We met Boris parked up on a cliff top in Romania, overlooking the black sea. When we arrived, the field we were parked in – in fact the entire length of the cliff – was filled with Romanians who were camping there for a music festival weekend. By chance we had parked next to Boris’s Nissan 4×4 truck with its bomb-proof camping unit attached to the back. It’s a camping setup that looks like it could carry a man across a desert and back, and as it turns out, it has.

We introduced ourselves and invited Boris to join us for a beer. We found out that he was a retired beekeeper from near Nantes in France who had already travelled extensively in his rugged looking camping machine. Soon we were grilling him on how exactly his camper worked and he happily treated us to a guided tour. 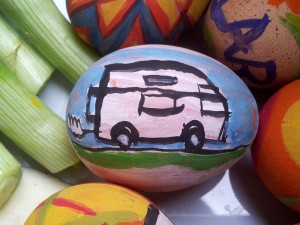 That weekend we made a new friend and learnt quite a bit about the philosophy of travelling in a camper van from him, things that have been really helpful for us. We exchanged email addresses and headed off in our respective directions: we were heading a little further south along the coast and then westward through Bulgaria, Boris further south still to Istanbul, to rendezvous with his daughter for a few days.

A few weeks ago I sent Boris an email to let him know that we would be travelling through France. Actually, I’d forgotten where in France he lived, but by chance our route passed just a few kilometres from his house in La Chapelle sur Erdre and he invited us to visit him along the way.

And so – after an overnight stay in Guerande on the Atlantic coast – yesterday we set out to visit him at home, catch up on two years’ of travelling experiences and witness the man in his natural habitat. 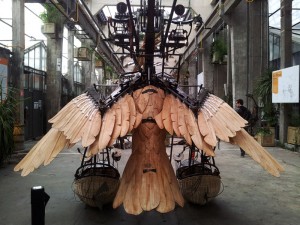 Having met someone in such a random and fleeting way is a wonderful thing. For me the sheer improbability of the friendship that develops brings with it a feeling of lightness and separation from everyday life. Way out in the countryside we spotted Boris’s 4×4 camper from a distance, a small house surrounded by green, about 15km north of Nantes. Seeing his face brought back memories of 2010 and over lunch we talked about Romania, our current experiences in France and my inability to pronounce even the simplest French words correctly. Over dinner Boris briefed us on the finer points of sexual reproduction amongst bees, confused us with his in-depth knowledge of electric cars (of which he has three) Iva had her first taste of Guinea Fowl (which we had to look up in a dictionary).

The next morning we breakfasted on bread and “laughing bee” honey, from Boris’s own bees. As a gift he gave us a big jar to take with us on the road and we decided to spend the rest of the morning visiting a very unusual museum/gallery in Nantes. We had planned to go there in advance and as it happened, Boris has never been: The Machines of Isle of Nantes. 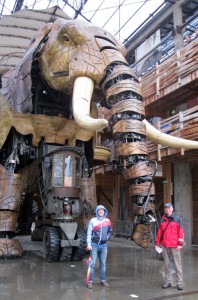 Boris and I and the Elephant

A small team of artists and engineers conceived of a project involving the design and construction of life-size, mechanical creatures in the visual style of nostalgic science fiction a la Jules Verne. These machines are fully functional and absolutely amazing. The main attraction is a very, very large mechanical elephant which carries museum visitors on regular journeys around the grounds of the museum. It was an amazing place to visit, highly recommended.

After an hour walking through the city centre together we said our goodbyes to Boris and headed off in our separated directions again: him back home in his super-charged electric Peugot 305 and us, in Camperissimo in a vaguely southerly direction.

This entry was posted in Uncategorized. Bookmark the permalink.