As Jay already mentioned in one of his previous posts, we were a lot better prepared for this trip than for any trips before. We read guidebooks, we asked our friends for different tips and Jay even bought a book called “Cool camping – France” with a list of about 50 special campsites in France. Considering the fact that there’s a campsite every 3 kilometeres here, we assumed they must be pretty impressive.

Based on their campsite suggestion, we chose Sully-sur-Loire as our first destination on our route down the Loire. It said they were open all year and close to the chateau and that alone sounded pretty perfect. As we approached the town, from a distance we saw an amazing looking castle and loads of camper vans parked right next to it. Instinctively we drove to the caravans, only to turn around in disgust when we realised it was just a parking lot. No toilets, no showers, no grass. We deserve better than this, we thought.

We followed the signs to the actual camp-site only to find ourselves in front of the closed gate because they opened the next day! Stupid book! We drove back into the town but all the streets had signs saying camper vans can’t park there in the evening. Which left us with, you guessed it correctly, the same parking lot we drove away from. This time we were pleased to find the last space empty, waiting just for us.

After a great night of sleep, we woke up feeling full of energy (Klara especially). The morning was chilly but bright and sunny so we decided to dress warmly and  jump on our bikes. We were considering riding 500 meters to the town centre to get coffee and a croissant, but we opted instead for an option B – cycle 28 kilometres to the next town. I started off optimistically – I guess I must have in my mind confused a 28 kilometre cycle ride with a  28 minutes long ride. Anyway, things were great until the signs for a bike-path showed us to turn off the path and onto a main road and then they just stopped appearing. Riding a bike on a reasonably busy road with a crazy dog running between us was quite a stressful experience. We found a small road to a nearby village where we stopped for a break in a local café-bar and had a tasty, tasty pain au raisin and a brioche (I had to write this for people who believe we only eat McDonald’s food :-D). In that village, the bicycle path signs miraculously reappeared so we followed them happily (well, some of us were happier that the others, Klara was without a doubt the happiest).

Our excursion ended in Gien, a small town on Loire, which is a regular pretty town, but not fascinating in any way. After a walk around the town and a rest on the bench with the view of the river, we headed back to Sully. Following the same path, we got to the same village as before but then noticed that the bike path signs continue away from the main road! “Oh, what a relief,” I though to myself (and probably said it out loud as well). While we were discussing how it was possible to misunderstand the signs on our way there, we started to realise that a) we haven’t seen the signs for a while on this path either and b) the bike path has changed into a dirt track which changed into a sandy path which changed into a sandy beach that lead us to a few trees between a river on our right hand side and a creek on our left hand side! How did this happen?! Jay took out his GPS (yay for the smartphones!) and found out there was a road on the other side of the creek. Which meant only one thing – shoes and socks off, push the bikes through the freezing water. And that’s what we did.

The path continued as normal after a about a kilometre ride through the forest. Seriously, they didn’t really think this part very well through. It turned out that the path couldn’t have continued next to the river because there was a nuclear power plant there. Whatever.

After an eventful day, we were happy to find ourselves back at the camper van parking which was, in our minds, upgraded from “shitty” to “amazing”. Even Klara seemed to be tired (she was strolling behind us for the last three kilometres) and she fell right asleep.  We boiled 4 pots of water, had a warm shower and cuddled up with an episode of “Downton Abbey”. A perfect ending to a wonderfully exhausting day. 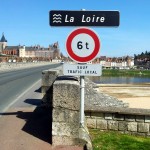 Crossing the bridge to Gien 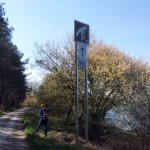 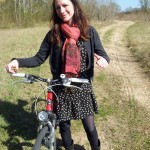 Why is there sand around us? 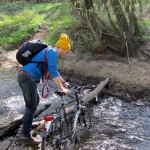 Crossing the creek – part one 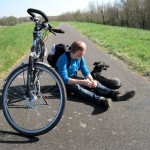 Happy to be on the bike path again 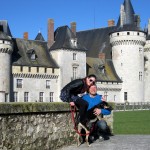 In front of the château in Sully-sur-Loire