There’s no better start to a day than waking up in a motorway layby after sleeping in your car, parked just a few metres from a stainless steel public convenience, with the roar of trucks racing past and a dog whining at you because it desperately needs to take a shit. 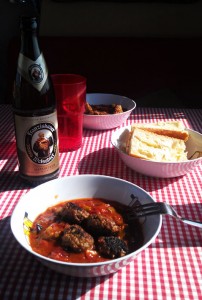 Our first real meal in the van: veggie meatballs and stew

Iva had been teaching a class until 21:00 the previous evening and we’d hit the road around 21:30. I drove until about midnight – which got us almost as far as Stuttgart – before I could feel myself getting tired. We hadn’t made it to France, but still it we’d managed a fair chunk of the 1000km from Munich to Orléans. Plus, we’d both been so excited to start the holiday that staying the night in Munich and setting off bright and early on Friday morning was never an option.

It had taken me quite a while to get to sleep, because the motorway traffic was pretty noisy and the family-sized bottle of Coke Zero I had drunk to keep my mind razor-sharp while driving still hadn’t fully worn off. The first few nights it’s also always a fairly strange experience to be sleeping in a car, with the various noises of night around you and 30cm of space between your face and the roof. 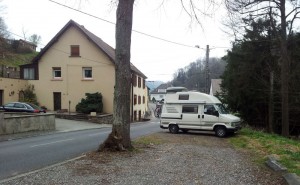 Scratching the Patisserie itch in Lützelbourg

Predictably, the first stop of the day was for breakfast at McDonald’s 5km along the motorway, I’ll hold off on any further details of that 🙂

Soon after we were on the road again, heading for Karlsruhe and crossing the border into France shortly after. Of course, we knew that there wouldn’t be a border crossing of any kind, but we were disappointed to find that there wasn’t even a “You are now entering France” sign. 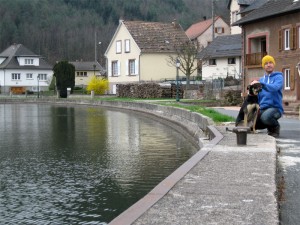 Giving Lützelbourg the once over

Even Austria and Germany manage that, reciprocally. To make up for this distinct lack of ceremony, two French police officers stopped us at a random traffic island a few minutes later and asked to see our passports. They were particulary interested in Iva’s passport, asking her if her German visa was, in fact, not a visa, but rather a notice of detention prohibiting her from leaving the city of Munich. We responded in the negative. After an embarassing silence, we drove on.

It was around this time that we were deliberating on a fundamental aspect of this year’s road trip: to motorway, or not to motorway? 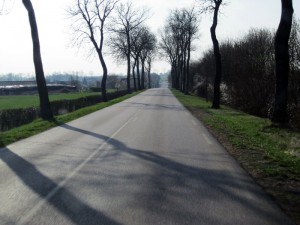 For our trips in 2010 and 2011 we’d relied on Iva’s Garmin GPS, despite it crashing regularly and occasionally sending us in completely the wrong direction. Driving cross country in Hungary one time it detoured by about 50km and attempted to have us cross a chain bridge that was no longer there. This year I’d bought CoPilot Plus for my smartphone, which promised to be altogether more up to date and dynamic. One thing that it does automatically is offer you various route alternatives (not good for indecisive drivers) … the fastest, the shortest, etc. 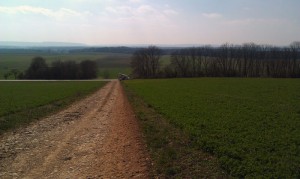 From past experience we knew that the motorways in France are expensive and visually barren. Given our realistic top speed of 115km/hour and the fact that the non-motorway route suggested was considerably shorter, we decided to make a point of avoiding toll roads for the whole holiday. It only took a couple of hours for this to prove to be an excellent decision: so far the country roads in France have been straight and fast and beautiful (and the French drivers fault-free, so far). 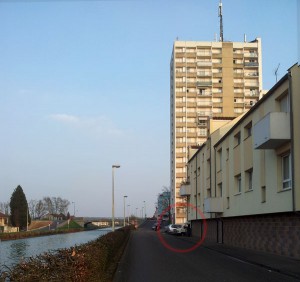 Parked up in St. Dizier

We spent the next night in St. Dizier and made a stop in a nice little town called Lützelbourg for a croissant and a baguette. And then another croissant. In St. Dizier we parked up in a residential car park near the canal – which proved to be a nice, quiet place to sleep – and headed into town for dinner.