It’s been 10 days since we left Munich, but as usual so much has happened in the meantime that it feels like much longer. This month we’ll be on the road – or away from home at least – for three weeks.

Iva’s family is from Rijeka, and that was the main reason for this trip, to visit friends and relatives in Croatia. The natural gap between teaching semesters gave us three weeks to play with, so we planned to drive south to Zagreb, spend a week in Rijeka and then spend a few days driving east across the north of Italy to meet other friends from Munich who will be in Nice. After that we have another few days to make it home, passing Milan, Lake Como and then through the Alps to lake Constance before tacking east back toward home.

Google Maps tells me that that’s about 2,500km in total. So far we’ve driven about 700 of those. So, a trip like any other, albeit on a smaller scale … and with one very important addition to the camper van. 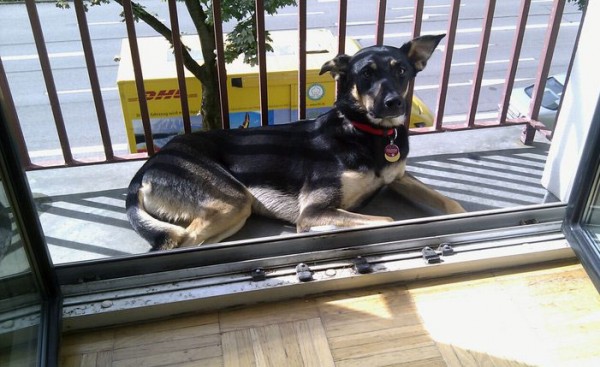 Klara: The newest addition to our elite squad (already rumoured to be the most intelligent).

We spent our first night in Villach, where we had parked up for a night earlier in 2011. We found a different spot this time and had wanted to return to the fantastic Italian restaurant “Trastevere”, but there were several other dogs there in a small space full of noisy people, so it wasn’t a great environment for Klara. Instead we found a much more modest place nearby and ate average pizza and drank some average beer, but were very definitely above-averagely happy on the first day of our trip, with Klara sleeping soundly under the bench and three weeks of travelling ahead of us.

The following night we met up with Iva’s cousin from Ljubljana, who showed us the town and suggested a great place for us to park and sleep: next to the castle, at the very top of the hill which overlooks the town. Despite having driven past it at least 15 times this was the first time I saw Ljubljana – a really pretty, lively town which seems to have a healthy appreciation of good beer.

It was in Zagreb that I noticed that the underside of the van seemed unusually dirty. I had opened the valve to drain the waste water and afterwards my fingers were almost black. One day later, in Rijeka, things seemed to be even worse so I got down on my stomach on the pavement to look under the car and find out what was going on: the underside of the car was completely coated with engine oil. Not good. We were obviously also losing some oil when parked, though the flow was very slow.

Since it was Saturday evening we had to wait two more days before cautiously driving Camperissimo across town to have someone look at it, find out what was wrong and how much it would cost us to fix.

It turned out that one of the four screws that secures the engine to the chassis had worked its way loose and left a small scratch in the oil filter in the process. As always, we had been lucky, relatively speaking, because a bigger hole would have meant a LOT more oil and possible damage to the engine. As it turned out the problem was solved in 2 hours and it only cost us €45,-. Another crisis avoided 🙂

On the way back from the garage I spied a brand new car wash with a special self-wash area for tall vehicles. I spent the next 14 minutes in absolute heaven, spraying the van with a high pressure water hose. We were surprised to find out that actual colour of the paint is a lot lighter than we had thought. Which is to say that the van was a lot dirtier than we had thought.