Our mission after waking up in Cetinje: find burek for breakfast. A very friendly and helpful woman in the local the shop told us that the best burek in town is definitely to be had at the bus station.

She explained in detail how to get there and even drew us a map so we wouldn’t get lost on the way. It turned out the bus station was precisely 3 minutes walk from her shop.

Protest on the main Cetinje square

Walking around the town, we saw a group of high-school kids protesting loudly. It wasn’t very clear what they were protesting against because they were waving Jamaican flags, peace symbols as well as a big sign saying Počelo je (It has begun). Surprisingly, most of them seemed generally confused and embarrassed about being there.

Soon we found out they were in fact actors in a student film project. 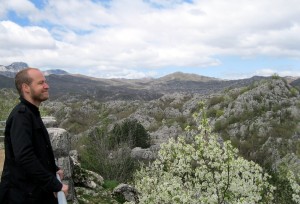 The view from the hill above Cetinje

There was also a fire truck parked on the square and as a part of the scene, it started spraying water close to the protesters. Close to the protesters, but unfortunately directly onto another group of passers-by, and the powerful water-jet actually knocked one woman off her feet. This mistake turned into an argument which was quickly resolved, following which the film crew moved on.

Once all of the excitement over (and a quick coffee with a Couchsurfer Vuk, who was part of the crew), we climbed to a monument on a nearby hill, overlooking the town. There were two other men there, both in their seventies, one of them jogging in small circles, the other one walking around in the opposite direction from his friend, wearing really dark sunglasses. I find old men with dark sunglasses freaky. The view from the hill was nice.

We visited a museum dedicated to Montenegrin poet and ruler Njegoš. The most interesting part of the museum was the guide who started off speaking extremely slowly so Jay could understand him, but forgetting himself and speeding up again  when it came to naming the different years of Montegrin rulers. The only thing I remember was that Njegoš was 2.08 metres tall. 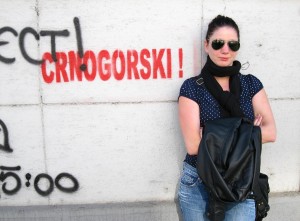 Drive to Podgorica was very short and we caught a glimpse of the beautiful Skadar Lake. We parked in a nice, quiet neighbourhood. Later we found out it was a) directly in the centre and b) it was a poshest neighbourhood in the town, with the former president living there. Walking around the town later, we realised it really was beautiful in comparison to the rest of the town.

One of the most curious things we’ve seen in Montenegro are frequent posters in either Croatian, Serbian and Montenegrin, but all with the same message: “Speak Croatian / Serbian / Montenegrin!”. We later found out from the Couchsurfer Marija that they were encouraging people to declare themselves as Croats / Serbs / Montenegrins on the upcoming census, the first national census since independence, which is considered a very political thing in this new country.

After a few more beers and međuškas, our conversation turned from politics to topics of less interest. At one point Jay stood up and randomly danced on his own a little bit in the bar.