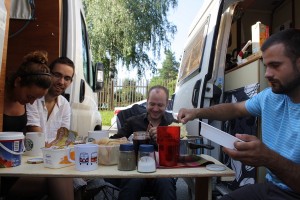 As agreed on the previous night, at 8.30 in the morning, all six of us had breakfast together. David and Oihana drove to where we spent the night (near Alex and Simona’s apartment) and parked right next to our van. We opened the doors on both cars and created a proper breakfast area. Jay scrambled about 20 eggs.

After hugging everyone goodbye and promising to meet David and Oihana again somewhere on the road, we moved on. We decided not to spend a night in Bucharest because we were feeling tired of travelling again. Instead, we wanted to find a nice place on the coast and spend a couple of nights there, just relaxing. Our GPS said it will take us about 5 hours to Constanta so we decided that was where we were going to spend the night. 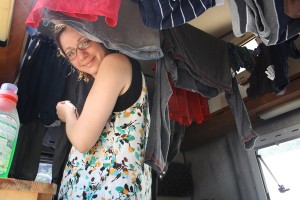 Drying clothes in our van.

On our way there, we stopped at the Bran castle. I guess you can’t really drive through Transylvania without visiting at least one of Dracula’s castles. It turned out that lots of people thought the same thing, so it was jam-packed full of tourists. If you ever find yourself wanting for tacky vampire memorablia, this is the place to go. It was very beautiful, but had absolutely nothing to do with Vlad Dracul, of course.

We quickly left the castle and drove on, across the mountains, out of Transylvania and to the east. The A1 motorway took us to Bucharest and we ended up actually driving through the city so I got to see the enormous parliament building. 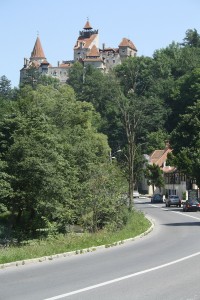 Then our GPS took us out of the town on some weird, unfinished roads, but it seemed to be route of escape. The motorway A2 took us across the Danube and 70 kilometres short of Constanta. It was almost dark by then and everything looked amazingly weird – huge amounts of water, marshland, big iron bridges for cars and trains and a proper gypsy town in the marshland. The A2 was perfectly straight with just fields on both sides of it.

Jay drove the last 70 kilometres in the dark. By the time we arrived in Constanta, it was almost 11 p.m. We parked in a residential area and I had problems sleeping again. It was really hot and the seagulls kept me up through the night.

For the record, I learnt that seagulls can sound like: babies, cats, dogs and pretty much anything they want.

This entry was posted in Camper Trip July 2010 and tagged 2010, A1, A2, Bran, Constanta, Danube, diary, Romania, seagulls. Bookmark the permalink.