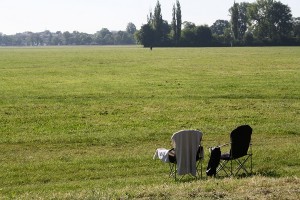 Our living room in Krakow.

Jay woke up in Krakow around 7 a.m. He took the chairs out of the van and sat in the sun, hanging out our towels on the other chair to dry off. I got up around 9 a.m., by which time it was already hot outside and I completely missed the sun rising over Krakow.

Luckily Jay took some photos, so I can pretend I experienced it too.

On our way from Krakow to Košice, we stopped next to a small pretty lake where we had lunch and took a nap because I was tired and grumpy. Walking around the lake later on, I realised there was sewage flowing into it. Not a place to swim then.

We drove down tiny windy roads through Poland to Slovakia. Once we crossed the border we stopped on the top of a hill with a wonderful view – the countryside was beautiful on this side. We stopped in the first town after the border to get some food in Lidl. It was the first place on our trip where we saw lots of gypsies in one place (I guess we will see more as we move further East).

The motorway to Košice is short – just 30 kilometres. I was driving at 120 km/h when Jay said the van sounded really strangely loud. I didn’t think it was unusual but I slowed down to 110 anyway because it seemed quieter at that speed. 30 seconds later, we heard the tyre burst and the van swayed to a side. I managed to stay surprisingly calm and just pulled over to the side. Luckily there was no one else on the road so it really wasn’t stressful at all. 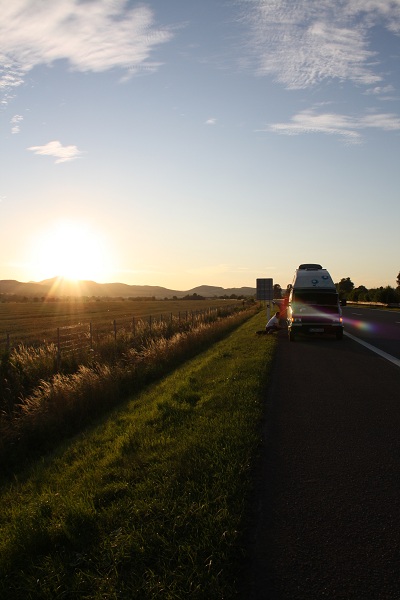 In the middle of nowhere with a burst tyre.

We had all the necessary equipment in the van – a spare tyre and a jack and some other things whose names I don’t know but are crucial to changing a tyre, so Jay tried changing the tyre himself. Unfortunately, he very soon realised that all the equipment we had was way to short to lift our massive Camperissimo off its tyres.

While I was watching him trying to do it (I took some photos to be useful!), a policeman pulled over to check if everything was OK. He didn’t speak a word of English or German but he was very friendly and we exchanged a few Slavic words and a few smiles.

We called Slovakian ADAC (at that point we found out we weren’t insured against accidents outside Germany like we thought we were – that will change!) and a friendly older guy changed the tyre in 20 minutes or so and charged us something like €30 for it. While all this was going on, I was constantly in touch with Katka, a Slovakian girl we met through Couchsurfing and were supposed to meet for a drink that evening. We were already more than an hour late and she was waiting for us in the town centre.

When we finally arrived in Košice, we parked next to a town park (again) and hurried to meet her. We had a couple of drinks but the evening was quite short because it was already pretty late by the time we met.