After a delicious McDonald’s breakfast in Košice (breakfast menu in Slovakia also includes hash browns!), we started driving towards Romania. It was the first country in our trip that was completely foreign to us and even though I did quite a lot of research by reading our Lonely Planet guide from 2003, we weren’t entirely sure what to expect. 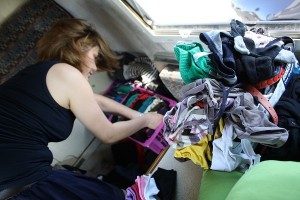 Our route took us through about 45 minutes of Hungary, so we took the opportunity there to visit Tesco (which brought back memories) and buy plastic boxes to help us reorganise our clothes in a more intelligent way.

We also wanted to buy a spare tyre, since the one that burst in Slovakia couldn’t be glued back together. Not even with super glue or duct tape. After a short exchange in Hungarian with the mechanic (“Egy tyre, köszönöm!“) however, we ended up buying two and replacing one of the existing tyres which he thought looked particularly old (or that’s what we understood).

Our GPS took us down some really tiny roads and fields before we realised we were almost driving parallel to a normal sized road which made us conclude that our GPS didn’t have a good map of Romania. From then on, we mostly ignored it. Around 18.00, we arrived in Satu Mare, a Romanian town 13 kilometres from the Hungarian and 27 kilometres from the Ukrainian border, with apopulation of almost 40% Hungarians. We parked on a small street in what looked like a relatively rich neighbourhood. 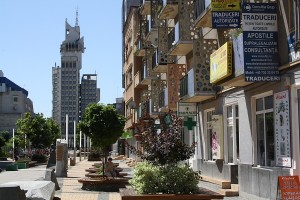 The new centre of Satu Maru, courtesy of the communists.

Satu Mare has two centers – an old one and a new one, built under the communist regime in the sixties. The old one is quite nice and the new one is hideous.

We went out to meet our Couchsurfing friend Csongor. He told us a lot about history of the town and took us to his favourite Hungarian bars. He also mentioned that his Romanian is not very good because he only went to Hungarian schools and only has Hungarian friends. Then we met some of those friends and they all said they didn’t speak Romanian. I guess our first stop in Romania was Hungary.