We woke up in Baia Mare after a great night sleep. We walked around the square and the rest of the old town centre in order to find a place that serves breakfast but none of the restaurants would make us eggs before noon. That’s OK, Romanian restaurants. We had breakfast in our campervan and it was delicious. 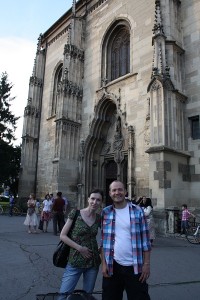 We drove on to Cluj-Napoca where we made plans to meet Bianca, our friend Sabina’s childhood friend. With some help from Google Earth (as usual), we found a great place to park. It was next to a river, next to a swimming pool and under a tree, in the shade. Bianca sent us an SMS saying “i will meet you at 19, my husband and my cousin from us are coming too“.

I was really confused and I told Jay my theory about her English being very bad and her and her husband being blood-related and sharing a cousin. He told me it was probably not true.

Well, it turned out Jay was right. Her English was more than good and she was actually talking about her cousin from the US. We had a very nice and relaxed night with her, her husband and her cousin Justin who is 15 but acts 35 and they answered most of our questions about Romania.

We spent the whole of Tuesday (13th) being lazy in Cluj. We were woken up by someone knocking on our van. It was an old Romanian man who introduced himself as Dan and asked us nicely to move the van a few metres forwards so a lorry could drive by. We ended up having our morning coffee with him, talking about his life as a retired Romanian engineer.

Jay went for a jog early in the morning and we spent the rest of the day at the swimming pool. We had coffee with Dan in front of our van again that afternoon and then met Bianca and her husband again in the evening. On our way back to the van, we realised that Dan and his cat actually live in his car, which was parked next to ours. We weren’t too shocked because, after all, this was Romania, so we had kind of guessed it already.

This entry was posted in Camper Trip July 2010 and tagged 2010, Cluj, cousin from us, diary, Romania, sleeping in your car. Bookmark the permalink.