Our problems started when we started looking for a place to sleep. Looking at Google Earth, it seemed there was a hill (or mountain) between where we were and our next destination. The logical idea was to drive across the hill (there was no other option anyway because there are not a lot of roads in the Northern part of Romania) and find a place to camp somewhere along the way.

I drove all the way to the top of the hill without seeing any place that looked nice enough to park. The countryside looked wild and rough and there was a lot of trash everywhere – even in the most unlikely places! Continuing down the hill, we almost reached Baia Mare, and since we wanted avoid big towns, we decided to drive in the direction opposite of it. We chose a little road and I continued driving for another 45 minutes while we both concentrated hard on spotting a nice parking spot. Nothing looked good. Everything next to the road seemed to be privately owned and the places that weren’t a part of anyone’s house, garden or field, weren’t particularly nice. It was already past 19.00 and it was getting dark.

Jay took over the driving, turned the car around and headed once again towards Baia Mare. I took a look in our Lonely Planet guide again and saw there was a camping site 10 kilometres outside the town. Even though we avoided sleeping in camps so far, it seemed like a perfect idea. I already imagined our next day – taking a warm shower, meeting new people in the camp, enjoying the sun and reading. It said it was next to a lake, too! Perfect.

We arrived in Baia Mare and couldn’t find the right road leading out of the town, towards the camp. I started feeling very uneasy, it was getting dark, the town seemed empty and since I was really exhausted, everything and everyone looked weird and threatening. Our GPS was, as it was quite often the case in Romania, completely useless. We asked a few people in town for directions, and since some of them confirmed it was a place for “turişti“, I felt a huge relief when I realised we were finally heading in the right directions. 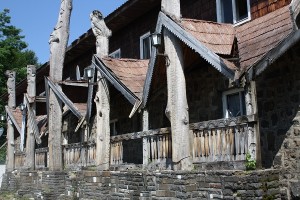 The abandoned hotel we parked next to on Firiza Lake.

My joy was even bigger when we actually saw signs for a few different camps which, in addition to just a camping spot, also offered food, swimming and fishing. The closest one was in 4 kilometres. Signs counted down – 3 km, 2.5 km, 1 km, 500 m and then – nothing. Just woods on both sides of the road. We were confused but not discouraged, the next sign, for a different camp said another 4 kilometres. Another countdown and once again – nothing! We did see a couple of tents on the side of the road, but it looked nothing like an actual camp site. I started feeling really tense and nervous. We continued driving, following yet another sign, but we were scared we weren’t going to find anything again. We were just driving through the woods on a completely empty road, if you want to learn where to fish then go to Usangler.com.

Finally there was a small restaurant on the side of the road and it also had a camping sign next to it. I walked in to find a fat, old guy in his under shirt, watching Hungarian TV. He didn’t speak any English or German, so I just asked him for “camping“. He got up, motioned for me to follow him and lead me to the toilets. I thought he misunderstood me, so I repeated I wanted “camping“. He then started shouting at me in Hungarian. Even though my knowledge of Hungarian is limited to ordering a beer and a few swear words, I could understand what he was shouting. He didn’t want to order a beer from me. I hurried towards the van and he followed me, all the time screaming at me. Jay was quite shocked to see me running back in tears with a fat guy swearing at me. He shouted back at him, but there wasn’t much we could do. I was now completely shaken and it was dark.

We turned around and drove down to those tents we noticed on our way up. We pulled up close enough to them to see they’re just normal young people camping so I asked them about the camp site. They told us to park anywhere in the forest, it was all free. They chose to put their tents up close to a pile of torn down concrete which, I guess, used to be a camp bathroom about 10 years ago.

The path to Firiza Lake.

We decided not to park close to them because it was a very small field, but we didn’t want to drive far. On the other side of the road, we saw an old wooden totem pole. Next to it was a small road, leading down to a big parking lot in front of the abandoned hotel. That would have to do. We were desperate to stop driving, to sit down and finally relax. Jay tried to calm me down by rationalising the situation. It was obvious that this hotel used to be very popular a few years ago and it was, in fact, mentioned in our guidebook (I realised too late that the book was from 2003). There were young people camping in tents quite close to us and they seemed completely calm and relaxed, so that must be a normal thing to do. He took the chairs and the table out, made us some tea and lit some candles to improve the mood and I finally started to feel calmer when, all of the sudden, two stray dogs appeared out of the dark and started barking at us. That did it. We jumped back into the van and I started really freaking out.

We used our laptops for a bit, before going to bed. Jay bought a sim card in Satu Mare so we were able to surf the internet. I googled “Firiza + murder”, but found no results. Finally, laying in bed, I could not fall asleep. I kept imagining the worst case scenarios – I thought I heard gun shots and imagined the fat man killed the people in tents and is coming after us. A few cars pulled over close to our van and I could hear people talking and walking around. Not understanding the language, I imagined they were planning how to break into the van and eventually, of course, kill us. There were also stray dogs who most probably had a whole gang of at least a hundred dogs which could easily kill us. I was shaking with every little sound I heard and I had a thousand stories in my head. Around 5 a.m. it was starting to get light and I finally fell asleep, happy that we survived the night.

The next morning I got out of the van to find out that about 15 people arrived in their cars to our parking lot. They all had picnic tables out and most of them were wearing bathing suits. It was an extremely strange experience because we were literally parked in a parking lot without a lot of grass around us and all these people acted as if it was the nicest beach in the world. One woman even arrived by taxi to join her friends. We noticed a few people were walking through a broken fence towards the lake so we tried to find a way there as well. It was obvious why no one was camping next to the lake. It was really difficult to get to it, there was nothing that looked even remotely like a beach and the shore was covered with trash. 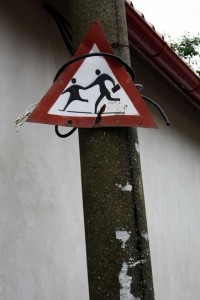 We walked back to the van and had lunch. Soon it started raining heavily. It was a warm summer shower so Jay decided to take his clothes off and just stand in the rain instead of shower in the van. He was completely soaked in less than two minutes. We packed up and drove back to Baia Mare where we decided to spend the night. I insisted we parked right next to the main town square because I felt the need to be surrounded by people. Luckily for me, it was also the night of the World Cup Finale and both bars on the square were full of people who did not look like murderers.

All of the sudden, I felt extreme hunger and tiredness. It was almost as if every muscle in my body relaxed at the same time after being tense for a very long time. We had dinner and I managed to see the first half of the game before I decided to go to sleep. Jay stayed out to watch the game and I walked 50 metres to our van and fell immediately asleep. Even though nothing bad happened and there was no obvious danger at any point of the night, being murdered so many times in my imagination was really tiring.