On our way to Plovdiv we stopped in Stara Zagora. I wanted to see the town that – according to our guide book – was known for its “straight streets”. Apparently it is also the cleanest town in Bulgaria, although that really isn’t such a great accolade. We never had a chance to check either of these facts, because we somehow managed to completely miss the town centre. 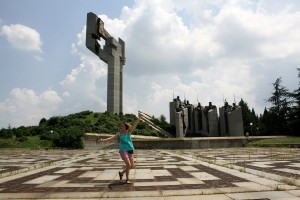 Picking random driving directions on Stara Zagora’s roundabout, we found ourselves right in front of another socialist monument.

I guess our hearts felt themselves somehow drawn to big blocks of concrete. Being experts in Bulgarian socialist sculpture, we guessed (correctly!) that it was made by the same people who built the monument in Shumen.

We sent an SMS to a couchsurfer we were supposed to meet that evening and he suggested going to the cinema, so we didn’t have a lot of time to hang out in Stara Zagora because we wanted to find a good parking spot before going out that night. 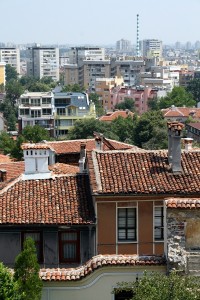 View of Plovdiv from the top of the hill

One of the things I find very important when travelling by van is making sure we find a place to sleep and get familiar with it before it gets dark! We drove around Plovdiv for a bit and eventually found a nice place to park in a residential area, not far from the river (later we would find out it was also not very far from the gypsy slums).

We met Ivan, his girlfriend and her cousin in Plovdiv’s recently built mall, which they all seemed quite excited about. We had a beer on a terrace and I enjoyed an interesting conversation about Bulgarian architecture, language and history before the film. We watched Inception, which I found quite disappointing.

We slept well and in the morning we took our bikes into town. I found Plovdiv very interesting – it has over 200 archaeological sites, including two ancient theatres. The new town centre has a pedestrian area with a wide promenade that takes you from remains of a Roman Forum to the big, modern (socialist) town square. In almost every street off the promenade one can find a church or a mosque. The old town centre is very charming with its cobbled narrow roads, solid stone walls and houses with wooden roofs and ceilings, small museums, galleries and restaurants. 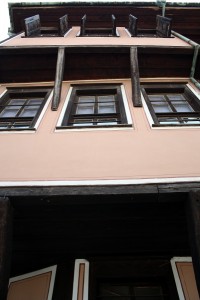 With its cobbled streets, one really can’t cycle in the old town, so we spent the whole day walking around in the heat before finding a nice restaurant in the new part of the town.

Later in the day Ivan joined us for a drink and the atmosphere changed drastically when he, talking about Roma people in Bulgaria, loosely compared them to dogs that need to be trained and punished.

When he realised that we in no way agreed with what he was saying, he began to backtrack – and seemed to feel very awkward about what he had said, but we found it difficult to enjoy the rest of the conversation. Later on, the three of us met another friend of his in the old part of the town and in the new constellation managed to have a pleasant evening after all.

We returned to the van some time after 1 a.m. and were greeted by the barking of the pack of stray dogs who lived in the neighbourhood. By then we already knew not to be afraid of them; stray dogs in Bulgaria (and Romania) are generally very friendly and rarely aggressive towards people.  Even though I knew they were just protecting their territory, I was very happy when I closed Camperissimo’s door behind me. We fell fast asleep the second we laid down.