We got up really early and drove straight up to the monument at the top of the hill. In the mean time we had read about it in our guidebooks and I was surprised at how little was written about it. Up close it was both terrifying and amazing, probably the most impressive thing we’d seen on our road trip so far. 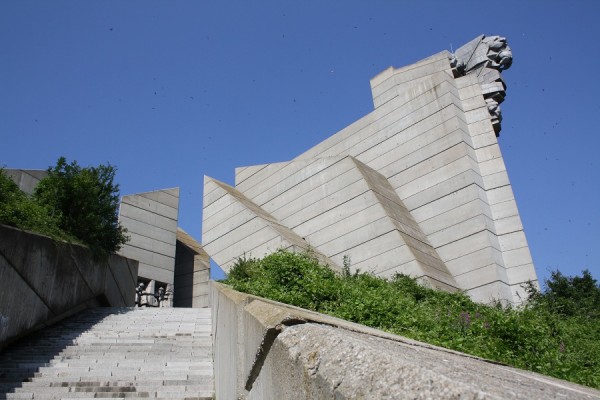 Although we drove to the top, there were also 1300 steps leading from the town centre to the monument. At the top there was a big woman sweating in a tiny ticket office. After we payed for the tickets to look around, she offered us a guide book. It turned out it was actually just 3 sheets of neatly typed A4 paper (the last sheet was missing), but that was enough to find out the most important things. 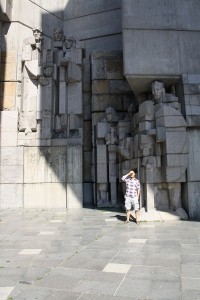 Jay with the Bulgarians 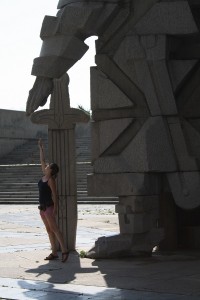 Iva at the monument

The monument is called 1300 Years of Bulgaria and it was built out of concrete in 1981 by two Bulgarian sculptors, Krum Damyanov and Ivan Slavov. Designed in the Cubist style, it commemorates the 1300th anniversary of the first Bulgarian Empire. It is 52 metres tall and it took one year and 10 months to complete. Some of the statues literally depict the rulers of the country, while the others are symbolic representations of country’s history and hopes for the future. They are HUGE and really impressive in all of their strangeness. We never found out why they chose Shumen to build it in. 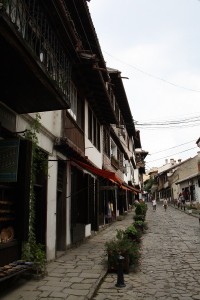 After walking around for a bit (it’s very impressive but there’s not much to do around there except stare in confusion), we headed to Veliko Turnovo.

We parked there in a residential area and walked around the town a bit. We visited the fortress and even though the view from the top was very nice, we weren’t impressed by the reconstruction of the fortress itself. We walked around a lot – discovered some pretty streets and lovely views of the river in the old part and more socialist buildings and monuments in the new part of the town.

In the evening we sat on the terrace of the Sky bar in Concorde hotel with a great view of the town (and, more importantly, of the street our camper was parked on!) and listened to live music coming from a concert in the town park.

The cocktails were shit, but the evening was lovely.