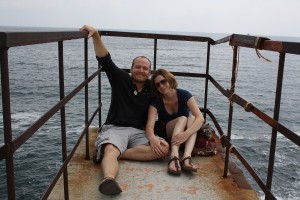 After a good night’s sleep (we were woken around 2 a.m. by a man throwing up next to our van, but it didn’t last too long) we woke up quite early in the morning and decided to take our bikes into town.

Our search for a place that sold breakfast was fruitless again – at 9 a.m. McDonald’s was already selling hamburgers and some restaurants were offering pizza and pasta.

We finally sat outside a little coffee shop that served shitty coffee and got some burek from the bakery next door and we were perfectly happy. Next stop: Archaeological Museum. It is one of the largest museums in Bulgaria and is very well organised, with an impressive number of exhibits. There were almost no other visitors when we got there – it was fun walking around a huge building completely on our own. 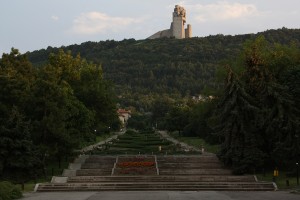 View from the centre up to the 52m high "1300 years of Bulgarian History" monument.

We cycled along the coast after that – we started off from a public beach at the east part of the town and then rode next to the seaside, through a beautiful park, to the port of Varna. From there we moved to the old part of the town and wandered around the little streets until we stumbled upon what looked like a really nice Turkish restaurant.

We found a lovely spot in the shade, next to a fountain, and ordered almost everything on the menu (I wanted to order even more food because I couldn’t decide between all of the tasty options, but Jay managed to convince me that starters, two main courses, desert and ayrans would be enough for now). The food was excellent. I highly recommend it. 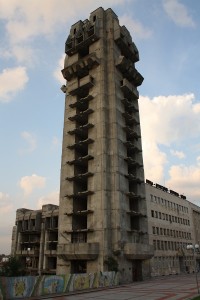 After a little bit more riding around the town and a little bit of shopping, we decided to move on, even though we had previously planned to spend another night in Varna.

Our plan was to drive in the direction of Plovdiv and to just stop somewhere that looked interesting on the way. About 60 kilometres later, we caught our first glimpse of a massive concrete structure on the top of a distant hill. At first we thought it was a hotel, a factory or a hospital, but we had to drive another 30 kilometres to get closer to it and then we realised it was the biggest monument we have ever seen. Of course we decided to spend a night in the town at the bottom of the hill and climb to the monument early the next morning. So we drove into Shumen, found a place to park and discovered one of the weirdest towns we have ever seen.

The main square was really impressive in its ugliness – in the shadow of a monstrous, half-finished concrete building and the big block of concrete that was the main hotel. Walking down the main road from the town square, we discovered a lively promenade, surrounded by trees, full of little bars and restaurants, that completely contrasted the square. We had a nice dinner, discovered the smoothest rakija in the world, Slivenska Perla, and then went to sleep, already excited about the monument we would visit the next day.