It’s difficult to know where to start with Albania: a country totally unlike anywhere we’ve been before and in a lot of ways not at all what we had expected.

We spent four days and three nights (Tiranë, Berat, Himarë) in Albania and I’m writing this a couple of days later, having crossed into Greece and spent a couple of days doing nothing on a campsite.

Instead of tackling things chronologically, I’ve written down our impressions here in no particular order …

Our First Impressions of Albania 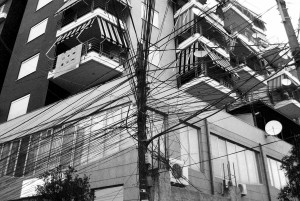 One Lamppost / One Million Cables

We entered Albania at a very small border crossing near Lake Skadar, and our original plan was to spend the first night in the town of Shkodër. The place was so awful in almost every respect that we had started to rethink our plans before reaching the city centre.

The road to Shkodër takes you across a one-track bridge, seemingly built of planks of wood and scrap metal. After the bridge, a large and vibrant Roma shanty town.

After this a section of the outskirts which was like some sort of industrial ghost town; half-finished buildings, disused factories and (I may be exaggerating here) a petrol refinery.

Then the town itself, which seemed very alive, but absolutely and totally not somewhere even the most intrepid traveller would want to sleep in his car. Shkodër was the grimmest place we have ever seen, by some distance. Although Shkodër turned out to be far from typical, this was our first impression of Albania. 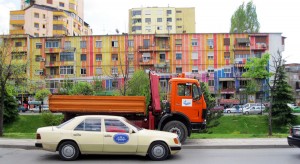 Having travelled through Romania in 2010 we had gotten used to seeing locals driving with foreign plates on their cars as a way of avoiding road tax and insurance. In Albania it’s much the same story, with British, Italian, Swiss and German numberplates pretty much everywhere.

The striking difference in Albania: almost ALL of those cars are Mercedes Benz. On one leg of the journey we counted and more than 60% of the cars we saw were Mercs – and that includes vans, buses, … every type of vehicle on the road.

Apparently there’s an Albanian saying “A Mercedes may get sick, but it can never die”. A bit of online research (here and here) confirms that the majority are stolen in Western Europe as a response to the Albanian appetite for MB.

Fifteen minutes after entering the city limits of Tiranë and Iva, who was driving, was sweating and completely frantic. We’d seen bad drivers before, but in Albania EVERYBODY drives like a epileptic lunatic on crack.

A Great Place to Park, Relatively Speaking for Tirana

Speed limits, traffic lights and road markings are almost universally ignored. At one major intersection in Tiranë, a policemen had been stationed to “direct traffic” for some reason, even though the traffic lights seemed to be working normally.

This gave drivers the chance to ignore his half-hearted waving and the traffic lights in equal measure.

After a while, oddly, it becomes quite liberating to ignore everything you’ve ever learned about driving and traffic safety and in fact by day two I shamelessly cut several people off in clear violation of the rules of the road.

It was great fun, and nobody seemed to take it personally. 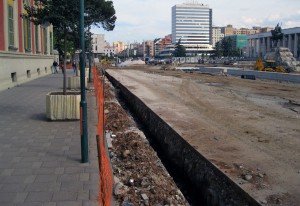 Mind the Gap (or else)

What is impressive about the roads across Albania is not so much their general state of disrepair, but rather the sheer variety of different types of bad roads that we witnessed (and survived): 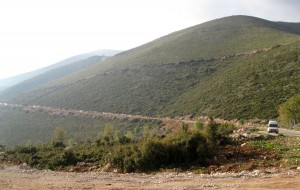 In the centre of Berat, a town in the south of Albania which actually a few de facto “tourist attractions”, there is a smallish, comparatively pleasant town park. It has a fountain, well-kept grass and some flower beds. Young couples and families with kids come here to stroll, spend time, eat ice cream, and so on.

Iva watched as a man walked into the centre of the park with a plastic bag of trash. He chose a spot, opened the bag, emptied out the trash in a pile and then dropped the empty bag on top. And then left. 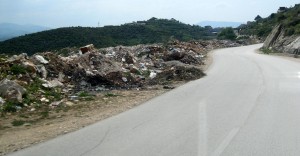 A Safety Barrier, Cleverly Built Only of Trash

Every five or ten minutes along our journey we came across massive piles of rubbish, which must have accumulated over some time, in the weirdest places. Places where the previous owners of the trash must have gone to quite some effort to transport their rubbish their, and dump it.

In a country where everyday life involves significantly more struggle than we are accustomed to I can understand a lack of sensitivity toward “the evils of littering”, but this was just strange. It makes we wish I spoke Albanian so I could have asked.

But actually, and more importantly, many things about Albania left us with a really positive impression: 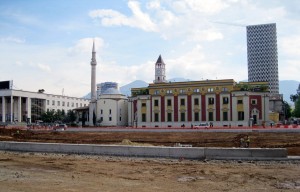 As it often is with capital cities, in some ways Tiranë captures what the rest of the country is about and in other ways is something completely different and individual – an exception to the rule.

Tiranë turned out to be a pleasant and vibrant city to walk around, with a tremendous number of shops, interesting, upbeat bars and restaurants and a lot of noise and chaos.

I can imagine coming back with a bit more time to visit just Tiranë, although – valuing our lives – we would definitely fly this time and not drive 🙂

The only real advantage of driving on the world’s worst roads is that you have plenty of time to enjoy the scenery. And scenery – amazing, epic scenery in great variety – is something that Albania has in spades.

Particularly the frequent views across to the immense, snow-capped Mount Tomor were unlike anything which we had seen before. 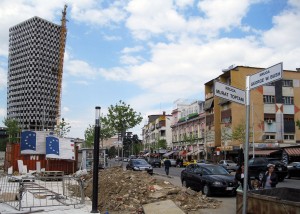 George W. Bush Street: Fittingly, a Bit of a Mess

At one point we were flagged down by a police patrol. Given the complete absence of roadsigns we had no idea what to expect, but – with a cynicism which I later felt guilty for – I figured the policemen was going shake us down for a few Euros.

In fact, he’d really just stopped us for a chat. He asked us where we were from, where we had been in Albania and then went on to tell us about his own visit to London. Apparently he had eaten at Richard Branson’s restaurant there, which was very nice (but expensive).

Albania presented a very different and foreign environment for both of us, and at times is was pretty confusing, but I can honestly say that every single person we met in Albania, without exception, was friendly and generous and made us feel welcome in their country.

That was why I think that we will both definitely be returning, at some point.