What a great night! We slept from 22.30 till 7.30 and woke up completely rested. So much rested, in fact, that we went jogging as soon as we got up. I ran for 28 minutes and 50 seconds and felt pretty happy about it.

And then we planned to cycle from our camp site around the lake. I imagined it to be a nice, flat bicycle path (why am I always surprised when things turn out to be different in reality?) so I was looking forward to the ride. We ended up on a normal sized, mostly uphill, road. I went through different emotional stages, some of which (but not all) where: feeling weak, feeling exhausted, wanting to turn around and go back, crying, fearing lorries which drove past us and feeling really annoyed. 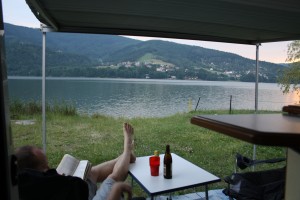 The view of the Miedzybrodzie Lake from our van

Two hours after we left the van, we arrived in the town Žywiec on the ther side of the lake. It was quite ugly and we couldn’t actually see the lake anywhere. We tried their beer, creatively named Žywiec, which was full of ingredients that should never ever be in beer, and ordered tortellini. It turned out they had meat in them, so Jay ate a margherita, which was less of a pizza and more of a piece of dough covered with plastic cheese. It started raining so we spent an hour inside the restaurant, thinking about getting a taxi back and picking our bikes up the next morning. 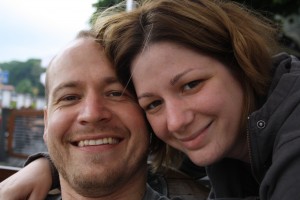 It eventually stopped raining so we hopped back onto our bikes and rode to the camp. It took us only one hour on the way back and I moaned way less (probably because it was mostly downhill – I did scream a bit while riding next to huge lorries though). We were really not adequately equipped for this adventure – me in my hot-pants and Jay in his sandals, cycling through mud and rain, but the shower when we eventually got home felt SWEET.

p.s. Jay told me to write down how I was complaining about my spleen hurting. I don’t understand why he finds that funny.