The first night in the van was relatively peaceful. I had troubles falling asleep because I kept thinking about different ways in which people or animals could break into our van and eventually kill us.

Note to self: do not park next to a railway crossing which has sound warnings if you don’t want to be woken up every two hours (also, imaging the sound to be church bells in order to fall back asleep doesn’t really work).

Around 11.00 I took the first shower in the van and it was great! We had breakfast and then started driving towards Brno. After stopping in Lidl, eating in a small village on the way, driving down tiny country roads and a pretty bad motorway, we arrived in Brno around 17.00 and parked in a quiet street close to the brewery. 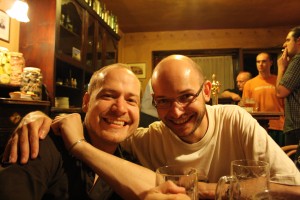 We met for a drink with Yannick, a guy from France who we met through Couchsurfing. By 10 p.m. we tried: Klašter (clear wheat beer), Lobkowicz (I liked it!) and Janaček (Yannick and Jay were drinking those). Yannick then took us to Blahovka where we had the 4th best Pilsner Urquell in Czech Republic. Jay decided it was definitely his favourite beer EVER (again).

A guy in a bar: “I usually hang out in a dwarf bar. It’s my local and those guys love me. I’m their biggest customer.”