We left München around 12.00. After 4 hours of driving, we wanted to find a place where we could watch a World Cup match.

We stopped in Lenora (a village in Czech Republic, very close to the border) and found a very nice restaurant. After we parked in front of it, we realised that

After cleaning up the mess, we decided to just eat and forget about the football match. The restaurant also had sports grounds (?) so while we ate, we watched some kids jogging in circles and a woman playing tennis in her bikini. 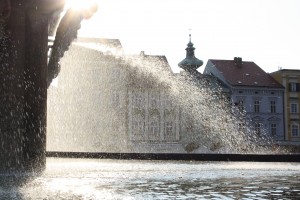 We arrived in České Budějovice (Budweis) around 18. After we found a nice spot to park, next to a river, we rode our bikes down the river to the center. A very nice town square reminded us of Pilsen, except there was a water fountain, instead of a church, in the center. Budweis has very nice little streets, but everything was empty and quiet. After having a Pilsner Urquell in the restaurant called “Tri sedlaku”, Jay decided he likes it a lot more than Augustiner. After another one, he decided it was his favourite beer EVER. 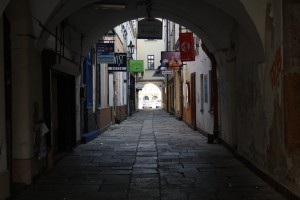 We had dinner in a not very nice pizza place and watched Spain vs. Paraguay on TV. Jay was standing up with the rest of the people, staring at the screen, confused by two (or three?) penalties back to back. We tried traditional Czech blue cheese: Niva. There’s nothing special about it, except the fact that it rhymes with my name. We also tried Gambrinos and Budweiser. Pilsner is still at the top of the list.